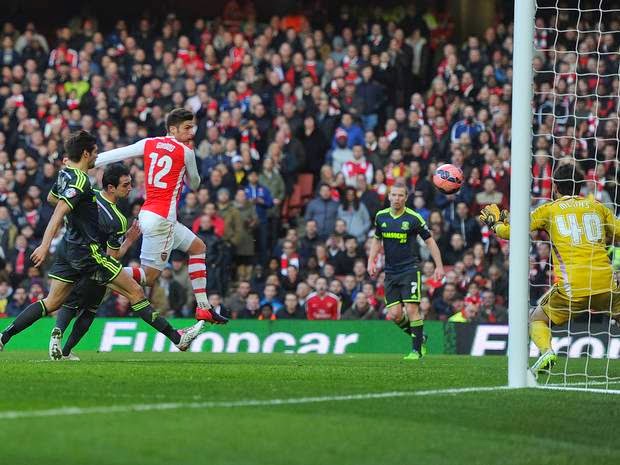 
As I type I just watched Laird put Preston ahead against Man U.  We have already been drawn in the quarter finals against the winner of this match.  As much as I would like to stick it to United at their ground, COME ON PRESTON!  I would take that quarter final match up all day.  Still a long way to go, and we are not here to talk about Man U, we are here to analyse the dominant Arsenal performance we witnessed Sunday.

This year there have been very few matches where I have felt relaxed throughout.  Villa a few weeks ago was one, and Borough yesterday was another.  It is easy to say that was to be expected, as Borough are a championship team.  But let’s be honest, they were in great form coming in and dispatched City very convincingly.  I will admit I had an uneasy feeling going in.  There were several changes to the team that struggled against Leicester.  I don’t think in anyway this was players being dropped due to form.  This was sensible rotation.  Very sensible, as the boss knew that these displaced players would play out of their skins to try to win their places back.

This was embodied most prominently in the performances of the full backs.  Gibbs in particular was spectacular and a potential shout for man of the match.  Full of energy and great technique.  He terrorised their defence while remaining resolute in our defence.  Monreal has been playing great, but Gibbs is lightning quick, and with that performance (including a great assist), I think he has made a stake for his starting place back.  Chambers was also solid in both defence and attack.  Although definitely slower than Bellerin, he is a lot taller, and won several important headers in the defensive battle.  This puts the boss in a great position, with two competent yet contrasting right backs that can be deployed as needed to stifle the opposition.

Szczesny had very little to do, but what he did do, he did well.  Not sure he will displace Ospina just yet, but he didn’t hurt his chances there.  Gabriel had an ok debut.  Again not too much to do, but looked confident.  Except for that usual incident where he put the ball out for a corner under very little pressure.  Debut nerves maybe?  His reaction was classic, pounding his head like a crazy person, I like to see a little insanity in our back line, and he definitely has the face to back it up.  He does seem to have the attributes of a good defender and look forward to seeing more of him in the future.

It was the midfield that ran the show Sunday.  A lot has been made of whether or not Ozil and Cazorla can be effective playing in the same team.  I am not sure where this comes from, like there would be some crazy Lampard Gerrard complex occurring.  They are two of the best midfielders in the world and both showed it in this game.  Cazorla is practically unplayable at the moment.  He is SOOOO two footed (as shown in his free kick) and using his low centre of gravity to devastating effect (as does Sanchez).  Ozil was on fine form and my personal man of the match.  It is great to see him let fly at goal more often now.  I had no idea he had such a powerful shot.  He usually seems to place his shots rather that strike them with real power.  But he has been hitting them lately and the keepers don’t seem to be able to hold on to them.  His form is very encouraging and I think there is much more to come.

Sanchez was back to his usual self, tricks and all.  I think when he was juggling the ball on his head, Mike Dean blew up simply as he thought Sanchez was having too much fun.  This is supported by the fact that I have NEVER seen Mike Dean smile, ever.  Sanchez’s header was amazing, the way he adjusted his neck to get it on target.  But up front, it was Giroud that really made his chances count.

The first was a great team effort and his second a lovely technique.  I don’t think many would regard him as one of the world’s top strikers, but he works in our system and he gets goals.  Would have loved him to have got the hat trick.  Next time, against Man U.  It seems we will have Man U away since Rooney just put the game away with a blatant dive in the box.

So on that note, we now look ahead to a quarterfinal at Old Trafford.  As much as I would have felt much more confident against Preston, beating Man U will be a much more satisfying path to the semi-final.