Fire And Ice On Display From Arsenal 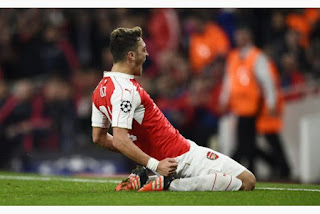 
Four days, two games, two incredibly important results.  We can talk about famous losses this season with Zagreb and Olympiacos but on Tuesday Arsenal put forward a win that could become famous if they continue to execute in the UCL.

Against Watford over the weekend the waiting was the hardest part as for an hour Watford frustrated the Arsenal side.  Compared to efforts where we’ve seen impatient efforts lead to opportunities on the wrong end the Gunners let the game come to them and when Ozil’s won penalty went forward for a Sanchez goal there was a breath of relief.  In keeping with our form Giroud and Ramsey followed it up making for a comfortable defense to the death.

That brought us to Tuesday and a showdown with Bayern Munich.  Taking anything away from Bayern would be a mistake.  They’re a team that win and win in spectacular fashion on a weekly basis.  When any team takes them down in any competition it’s a big win. What Arsenal did on Tuesday was a table turning example showcasing the fight and vigor of this team.

Throughout the opening stages Bayern and Arsenal traded blows at a tremendous pace.  This was a game that you show non-fans to convert them.  Two teams put on a masterclass of attacking, defending, and keeping football.   At the back Manuel Neuer showed why he’s widely regarded as the top keeper in the world with a blindingly quick bat away of a Theo Walcott header.  At the other end Petr Cech showed why he’s an institution in the hall of keepers with a number of saves, break ups, and turn aways.

The breakthrough took time but when it came it was off of a Santi Cazorla free kick that somehow found every part of Olivie Giroud’s upper body as he was being mugged and careened into the net.  A net left exposed by a rare Neuer mistake as he was tied up away from the ball with Koscielny.

Bayern’s attack created chances as the second half wound towards the end with Robert Lewandowski, in particular, stymied by Petr Cech late in the game.  With stoppage time winding down a Bayern pass floated across midfield – by looking at the makeup of the lineups at that moment there was no question it was the start of their last gasp but Hector Bellerin intercepted with the type of pace, confidence, and ability that just doesn’t exist.  It was an amazing play that for those who haven’t noticed should serve as a warning shot that Bellerin has become one of the top right backs in the world.  After the interception, on its own incredible, Bellerin turned on the jets got around a defender and put the ball cleanly on Meszut Ozil who put it in the net.  Kudos to the UCL officials on getting this call absolutely right and preventing an Oxlade Chamberlain flub on the rebound.

It was a cold calculating performance against one of the top teams in the world.   It was the type of performance we’ve seen on the other side on a number of occasions.  Bayern’s performance was classic Arsenal with dominant on the ball possession but it came with the same issues seen by the Gunners in a lack of clear chances and a frustrating lack of goals.  The result keeps Arsenal’s chances of advancing to the knockout stages intact.  Olympiacos squeezed out a 1-0 win over Zagreb to go even with Bayern at 6 points with Arsenal and Zagreb at 3.  In two weeks the Arsenal travel to Munich where a result is still needed.   A draw would leave them on at 4 points and if they can do the business they should have done earlier against Eastern and Southern Europe’s best they’ll have a good chance of moving forward.  Without the result today nothing less than 3 wins in the back half would have sufficed.

With Everton over the weekend Arsenal would be well suited to take a breath, say a little tithing for Aaron Ramsey’s hamstring, and continue to put in the types of performances that have made for a perfect October.