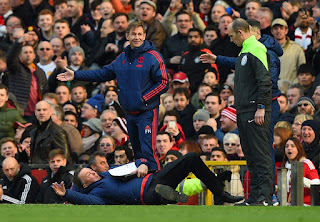 
There’s a point in time where every team finds the level at which their season is defined.  At this point we know that Leicester is a tremendous side that shows unyielding effort in contrast to spaces where their talent level comes up short.  We know that Chelsea, for their annoyance, is a club that has fallen apart and been, to a point, put back together to do as well as possible.  We know that Aston Villas is terrible.  Right now – I have no idea who, what, where, or why Arsenal is doing and that level of disorganization was fully on display over a week that featured 2 stinging losses.

Losing to Barcelona is nothing to new to just about every club.  They’re admittedly the top side in the world but the way in which Arsenal lost is the story.  Backline failures and inability to take advantage of opportunity doomed Arsenal’s home leg.  Overall though one could walk out of that match looking at the team and seeing that with some tightening the club could still have a successful season in the EPL.  As opposed to tightened up the Arsenal put in a match at Old Trafford that showed a ridiculously mistmatched lineup with mental mistakes so glaring, so poor, that its incredible this team is where it is.

At the back Petr Cech has been a wonderful change from the recent years of worry but there’s nothing a keeper can do at times and Sunday was exactly those times.  The core problem seems to be figuring out a capable central defensive unit – something that seems right along the lines of where Arsenal should be stable became an Achilles heel.  Gabriel has come a long way and has put in a number of solid performances, but for some reason the combination of him and Koscielny seems more perilous than Mertesacker and either of them.  I actually may have preferred a less mobile setup with Mertesacker and Chambers in this match having witnessed an utter collapse between the Kos and Gab.  Time after time Man U was allowed to dictate play inside the box leading to the first two goals.  The third goal took an unfortunate deflection off of Koscielny’s torso – but in the end… was that an impossible ball for Kos to knock down?  No.  What it impossible to apply a header to it as opposed to a chester?  Nope.

Lest you accuse me of applying critique only to the central defensive pairing Hector Bellerin’s defensive play has been regressing more than progressing over the last 3 months – ever since his UCL miracle play it seems like he’s been unable to perform to his potential.  On the other side I have a hard time knocking Monreal – he was, largely fine.   I will admit to annoyingly using the phrase “quick quick slow down” about 15 times during the game because largely, that was our offense.  Get the ball, move quickly forward, then Stop.  Piddle. Look for cute. Turnover.

More than the outside wings the central defensive mid pairing was, yet again, a huge problem.  Yet again, for the 10th time this year, one of the defensive mids decided that his position was central attacking mid, or wing mid, or central forward.  Aaron Ramsey was the culprit today as he’s been on a number of occasions.  Aside from hooking him and/or Flamini to a 30 yard chain 15 yards behind the middle line I’m at a loss. At what point does this team start to understand that playing out of position causes massively more problems than it solves?  This, for me, is a huge Wenger failing and it builds my respect even further for Santi Cazorla who, for any lack of goal scoring, played his position even if it wasn’t his preferred position.

The forward midfield was a mixed bag but much better than the back. Welbeck was the best player on the pitch for me.  He showed effort, heart, drive, and incisiveness.  Sanchez continued to struggle and I’m not quite sure if we’ll see him recover to his customary level until he receives a longer break.  It would be nice if Chilean coaches didn’t jam him into every minute of every match.   Finally Ozil.  I think Ozil is a man quickly growing frustrated at the lack of professionalism from certain parts of the team.  Particularly Ramsey’s desire to play his position even when he’s got another to play seems to be having a massively detrimental impact and the body language of Ozil was different than normal on Sunday.  While some accuse him of being somewhat soulless on the pitch he appeared outright pissed off for periods against Man U.  Simply put it looked like he was MIA at times and on second viewing – part of that was because there was a Welshman in the way multiple times.   Almost as if Ozil was compensating with a “what the hell are you doing there” effect being applied.

Finally, the biggest issue of the match was up front, as it often is for us…  Theo Walcott turned in one of the worst matches for an EPL caliber player that I can remember in recent times.  No successful runs.  Some of that is credit for Man U’s defense but the reality is Walcott failed to adapt his game in any form as they laid back and waited for him to run into them.  And in fact, he didn’t even get to do his customary run into the defense because his possession of the ball was so sparse.  His movement throughout the day can be described as utterly pedestrian, useless, horrible, and senseless and I have no issue with any of those statements.   Simply put the way he played on Sunday Theo Walcott showed a level of play that isn’t worthy of making a Norwich, Watford, or West Brom side.  It was an utterly pathetic outing from a very highly paid, highly regarded player.   The only solace I have for Theo is that he shouldn’t have been on the pitch more than 30 minutes.  It was tremendously clear that he hadn’t shown up and yet his manager left him on for an hour.

At the end of the day Arsenal’s week saw them effectively turn any UCL chance into nothing and a fairly good EPL chance into yet another attempt to avoid a UCL qualifier next year.  The only chance of an EPL success is to top Swansea in midweek and then Spurs in the NLD.  But at this point – what level of confidence has Arsenne Wenger inspired this year?  If anything the indictment of his last 12 months became more clearly defined.  The depth of the club is too dependent on players like Arteta, Flamini, and Rosicky.  Three players that have no business at the club anymore.  Three wonderful players who I admire deeply, but three players that should have been replaced.   The forward play, which I’ve given the benefit of the doubt time and time again, is fine – as backups for a top tier striker.  Giroud is a good hold up player, but in this game his hold up play was so constant that we often had no one in the box once he appeared on the scene.  The real indictment of Wenger might just be that this is a manager so concerned with honoring the loyalty of his players over the years that he’s tentative at making tough decisions that run counter to that honor.  For instance – Theo Walcott’s mammoth contract isn’t justified at this point, but golly gee we’re all happy he’s with us all the way.   We purchased another Central Defensive Mid who I’d like to see with Coquelin for a true defensive pairing long term… but we featured Aaron Ramsey, chronically out of position, instead.

Simply put – today’s effort and today’s strategy wasn’t good enough.  The play was awful, but the manager did nothing – absolutely nothing – to elevate or properly align them for success.  For me this season ends around 4th place and while that’s been good enough before, with everything that has occurred this year it is absolutely unacceptable and the club needs to address what has become a culture of complacency.