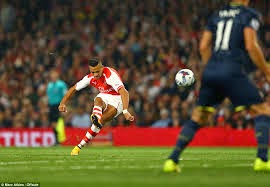 
Spent yesterday afternoon trying to enjoy a beer whilst watching an extremely dodgy feed of the Arsenal vs Southampton game.  Apparently the Canadian TV network bosses do not think the Capital One Cup is important enough to justify broadcast.  I have to admit, I have been trying to tell myself the same thing to consol myself since we bowed out.  Knowing we would face a tough Saints team, I had been mentally trying to tell myself we would likely bow out early this so that I wasn’t as gutted when we did.  That said, seeing the team sheet there was reason for optimism.  Yes we had a very youthful and improvised backline, but the rest of the team seemed pretty strong.  It actually highlighted the strength of depth we have in the squad, everywhere except for defense.

This stronger than expected squad also provided a positive start and went ahead thanks to Sanchez’s superb free kick.  I have to say, I am not a huge fan of his dead ball delivery, particularly from corners, but more direct free kicks please!  As always he was one of the best players on the pitch and really worked hard.  I hope he keeps up this work rate as time goes on, and I do get the impression that it is engrained in his work ethic, so will continue.  Another player that really impressed was once again Jack Wilshere.  It seems that his resurgence against City was not just a flash in the pan.  I am assuming that Wenger is intending to start Rambo against the Scum and rest Jack, but wouldn’t be surprised to see him come off the bench if we get in trouble.  He has really found his attacking flare again and I think that it would be criminal to try to convert him into a defensive mid as some have recently suggested.  This does not mean to say he cannot do a job there for England, but for Arsenal, let’s keep that talent firmly going forward!  Another player who may be converted into a defensive mid is Diaby.  Wenger said in his post match press conference that he may explore this option.  If used correctly it could limit his injury potential, he has the size and strength and he is great on the ball so I think this has potential.  Of course he may never get over his glass like composition and always spend long periods on the sidelines, but I am game for Wenger giving it a try.

The defense overall did pretty well.  I don’t think either of the goals were their fault.  Haydon looked good at the back and Bellerin had a much better game than his last mid-week outing.  Ospina, did ok, making some good saves and was not really accountable for either goal.  The first unfortunately rests on Rosicky’s shoulders, which was disappointing; I am not sure where his head was.  The second resulted from a lack of closing down.  From who, I couldn’t tell you as I was unable to identify the blurry figure on the feed and I don’t speak Arabic.  On a positive note that is the second game in a row we didn’t concede a headed goal, so that is progress at least.

Now we have no real avenue for playing the younger lads, bar maybe the early stages of the FA cup.  So I predict some loan moves in the near future.  Maybe Haydon, though we are very weak at the back.  Possibly Campbell again?  It is hard to judge him well as we haven’t seen too much yet.  He did ok yesterday, but looked a little like one of many players who are just not quite good enough for the Arsenal first team.  I get the feeling that it is now or never for him though, I do like him and I hope he proves me wrong (like how I covered my back there?).  Speaking of loan moves, AFOBE!!!  Have been loving Aneke lately, but what a goal scoring record form Afobe.  That was the second Capital One cup game with a brace for him (the first against Man U) and this is in addition to a great goal scoring run in League One.  I know people will be championing a striker signing in Jan, but I do feel he could come back and provide an option.  Whether or not he could cut it in the Prem remains to be seen, but if he can I would favor another bright academy promotion rather than another overpaid risk.  I know a sentiment not shared by many, but what can I say, I buy into the boss’ ethos on these matters.

Saturday will be HUGE.  Am hoping to head over the river to watch with Gooner.com and rest of the Detroit supporters group, let’s hope we will be celebrating!